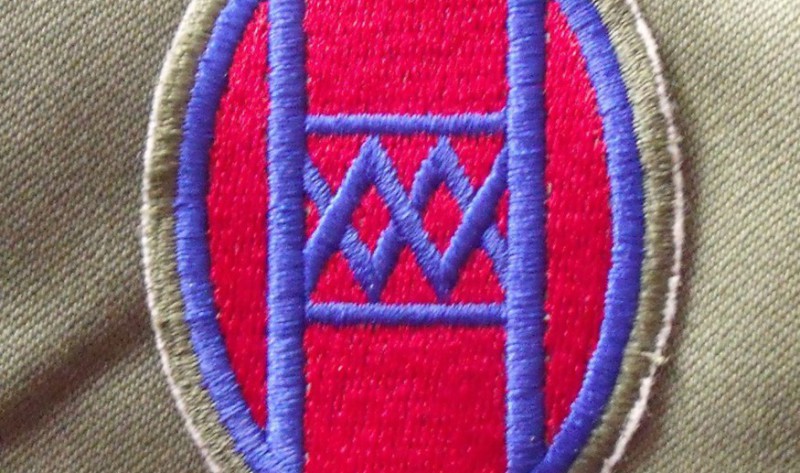 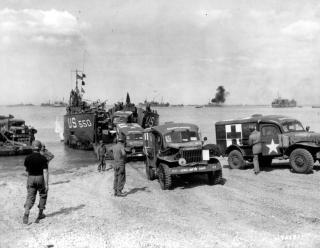 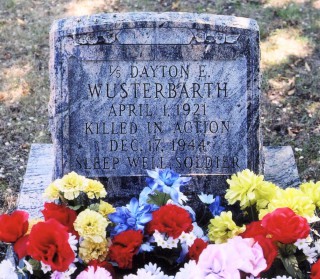 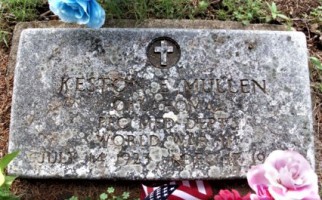 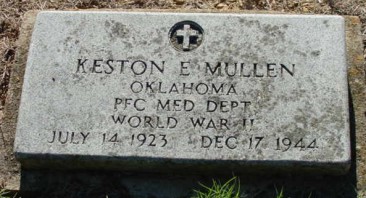 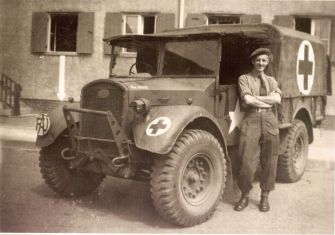 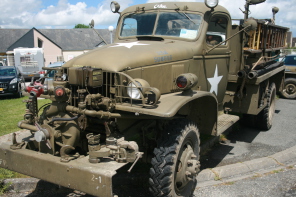 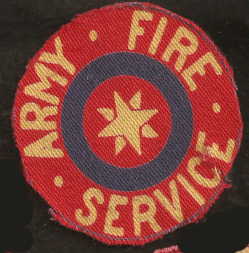 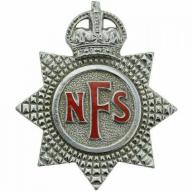 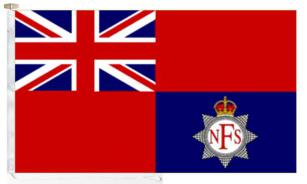 We owe this report to this sympathetic group of the AFS Vehicles Group met near the Ryes War Cemetery on Sunday, June 9, 2019 in the afternoon and who kindly stopped to accept a discussion and allow us to do the photos we are happy to present in this article.

Unfortunately, we only met one crew out of the three who traveled the sites of the D-Day beaches on the occasion of the commemoration of the 75th anniversary of D-Day, but we feel lucky to have been able to cross it on the D-Day Arromanches sector aboard a sublime vehicle and in impeccable uniforms and unusual that we had not crossed in Normandy.

We have received a booklet published especially for the 75th anniversary of the D-Day that we reproduce below with the consent of our interlocutors and with all our thanks.

We do not forget, of course, to quote the sources:

From the Wiltshire Retired Firefighters' Association newsletter, "The Branch" of June 2014.

Commemorated by the NFS and AFS Vehicles Group visit to Normandy

From the early months of 1943, the southern countries of England started to be used as temporary billeting and storage areas for the massive numbers of troops and their equipment, ammunition and fuel needed for the invasion of Normandy. This meant that the fire load in countries such as Wiltshire, Hampshire and Dorset increased very significantly and the NFS had to react to this. These areas of increased risk were designated as BLUE ZONE and fire crews and pump from NFS regions of lower risk were temporarily moved into the zone to reinforce the firefighting resources normally there. By all accounts, this worked very successfully and many fires that threatened to destroy ammunition, fuel and military vehicles were dealt with efficiently by the NFS without them reaching disastrous proportions.

Then, in March 1944, a call went out throughout the NFS for volunteers to join a new unit designated OVERSEAS CONTINGENT. As its name implied, this new NFS contingent was being formed to cross the Channel following up the advancing troops in Normandy and providing a fire fighting and fire prevention service to the Allied Military. Women were barred from applying and male applicants had to be between the ages of 19 and 41. Applicants came forward in large numbers but the selection process was rigorous and many failed it, resulting in another appeal for volunteers in May 1944.

The fire fighters that were successfully recruited into the new contingent were undoubtedly an elite unit and they were issued with shoulder flashes bearing the words "Overseas Contingent" together with other variations from standard NFS uniform such as a beret, a brown webbing belt, army boots with gaiters.

The special training given to members of the "Overseas Contingent" was aimed at bringing them to a high level of physical fitness. In many ways it mimicked the training given to soldiers attached to "commando" units except, of course, that no weapon training was given to the firemen. The training even included sessions in foreign languages. The advanced element of the training involved the NFS men being instructed in how to embark their pumps and other vehicles on landing craft and disembark them in France.

In Whitehall there was much thought having to be given to the legal status of the Overseas Contingent if elements of it were ever deployed alongside or right behind the fighting forces. What would happen to NFS men that might be captured by the enemy? In the end, it was decided to give the Overseas Contingent the status of persons accompanying or following the fighting forces as defined in the Army Act. It was hoped that should any NFS men fall into the hands of the Nazis they would not be shot but treated as prisoners of war.

The contingent was organised into "columns" with each mobile column being equipped to be as self-sufficient as possible. It seems likely that the planning that went into producing the post-war Auxiliary Fire Service mobile columns probably leant heavily on the experience gained from the Overseas Contingent mobile columns.

Gradually the manpower of the contingent was brought up to full strength but only after the ban on recruiting volunteers from London, Merseyside* and the Midlands was lifted. This ban was imposed so as not to seriously deplete the NFS in these high fire risk areas of the country. However, it was later realised that it was within these areas that lay the greatest experience in dealing with fires caused by enemy action and so blitz-hardened firemen were welcomed into the Overseas Contingent.

* (The Merseyside is a metropolitan county of England established in 1974. It is the region around the Mersey Estuary, formerly part of the counties of Cheshire and Lancashire. )

The D-Day landings did, of course, take place on 6th June 1944 and a decision then had to be made on whether or not to deploy one or more columns of the NFs Overseas Contingent to support the invasion forces. The top brass of the British Army soon made their feelings known that they did not want the responsibility of looking after the NFS as the liberation of France, Belgium and the Netherlands gathered pace.

As a result, on 17th October 1944, four of the five columns were stood down, but to the disappointment of the men, leaving just Column N° 4, which we represent.

- (N° 4 Column continued to train and saw active service between D-Day and January 1945 at V2 rocket incident in London.)

However, the Americans took and opposing view and stated that they would welcome NFS support. In January 1945, one column of the Overseas Contingent under the command of Divisional Officer J.M Kelly was sent to France .The column was attached to the Twelfth (US) Army Group and contemporary reports show that the NFS and US Army personnel soon struck up a very cordial and effective working relationship.

The serious impact that loss of fuel and ammunition through fire could have on the allied campaign was very much understood by the Americans and the potential for disastrous fires was massive. For example, one fuel depot dealt with the decanting of petrol into jerry cans and a total of 1,5 million gallons* was handled every day.

Remarkably, German prisoners of war were often placed on the nozzles of the petrol pipes from whence the jerry cans were being filled. Ammo dumps ranged in size from a small railhead to 25 square miles. The risk of explosion and fire must have been enormous and so it is little wonder that the US Army was so glad to have the Overseas Contingent working with them at such sites.

Divisional Officer Kelly soon found that his resources were severely stretched with his pumps and crews being scattered over an area of 30.000 square miles. By the time the column was sent home, the most northern element of the NFS was stationed at Wegberg actually inside Germany and the most southern was at Verdun in France. So much useful work for the Overseas Contingent was found that it raises doubts about the decision to only send one column overseas. Hundreds of major incidents were dealt with by the Overseas Contingent and the number of fires they prevented in incalculable.

The relationship between the US Army and the Overseas Contingent grew so close that the NFS men were issued with American working rig uniform and they temporarily adopted US Army ranks to avoid confusion. So, for example, a NFS Section Leader was referred to as "Sergeant" and Leading Fireman was known as "Corporal".

After seven months of hectic activity the Column was withdrawn on 15th July 1945 and returned to England. The Home Secretary wrote to the returning NFS men a letter containing the following:

- I have had reports of the hardships you endured and the zeal and efficiency with which you carried out the duties entrusted to you.... I congratulate you and welcome you back to your homes and friends.

Vehicles and their markings

Vehicles for the NFS Overseas Contingent had a number of extra markings in addition to the yellow triangle on the front left wing, and the circular NFS logo. A white triangle identified the vehicle.

At the top was the Column Number, which is "4" in our case, because Column 4 was the only one that went overseas. The others were stood down.

Below that were two letters and a number. We have chosen Company "C", Section "X" consisting of 5 vehicles.

The vehicles also had the Allied White Star in the White Circle on the bonnet and roof, and Army serial number on the RH front mudguard, and a 3 x I white stripe on the offside mudguard to indicate that the engine had not been waterproofed.

Each Column consisted of an HQ company and 5 companies, each of which had two sections, "X" and "Y", making a total of 522 officers and men.

The column consisted of:

We are representing part of a Section, which would have 5 towing vehicles and a mobile dam, with all of them towing a large 500 gallon per minute (approx. 2400 liters per minute), and a 350cc Royal Enfield motorcycle. For reasons of space, we had to leave the second Large Pump at home!

The Dodge Mobile Dam that we have today is exactly like the ones used by the Overseas Contingent, although they also had Ford versions. It is rated as 4/6 tons, meaning 4 tons fully equipped with crew, and 6 tons when you add 500 gallons of water (2 tons).

The towing vehicles would have been Ford WOT3 (War Office transport) vehicles with a canvas tilt. However, our Austin K2 is of similar age and size, and was used by the NFS earlier in the war. It would have spent most of the war towing a large Dennis pump.